Here’s a screenshot from my inbox showing that Swagbucks is still paying out as of April 2015!

With Swagbucks you can search and win, watch videos, shop, complete offers, and more. They even offer a mobile app now.

Click here to check it out for yourself! I chose Amazon as my reward but there are a lot of other options available too.

It’s the end of May and I felt that it would be a good time to drop an update with some proof of payment from a few fantastic websites. 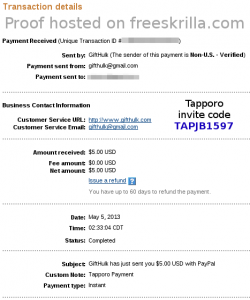 Tapporo is a great site where you can get paid to complete offers, try new apps/games, watch videos, and invite your friends to join in on iOS and Android devices. You can see my other posts about it by clicking here. You can read more on their website here.

If you decide to sign up and try it, make sure you use the invite code TAPJB1597 and we’ll both get a bonus. Tapporo pays out by PayPal, Amazon gift cards, and many other options.

Next up we have PaidViewpoint, which is a fantastic survey site. The surveys aren’t 2 hours long and boring. They’re pretty quick, easy, and fun. You get paid for each survey. This site pays out by PayPal. 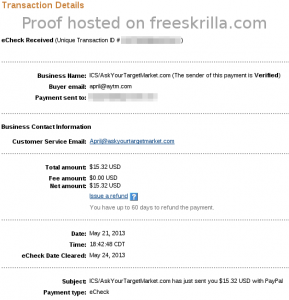 Edit August 5, 2016: Zoombucks has been replaced by Grabpoints. Check out my post about it here!

One last mention for May is ZoomBucks. These guys are another great search & win, watch videos, GPT combo site. 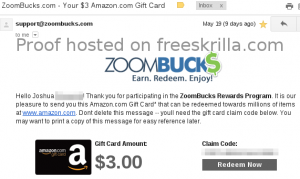 Click here to see my past posts about ZoomBucks, and click here to join and try it yourself!

Edit August 5, 2016: Zoombucks has been replaced by Grabpoints. Check out my post about it here!

I like posting payment proof and showing when a site is legitimate. I also like getting paid.

I posted about ZoomBucks a while back but never got around to posting proof.

They introduced a $3 Amazon card to the store, so I snagged one yesterday.

ZoomBucks is a Search & Win as well as a GPT site with offers, surveys, videos to watch and earn, “Pick a Number” Contests and more. Exchange your ZBucks (points) for prizes (gift cards) like Amazon, PayPal, Wal-Mart, Best Buy, Starbucks, and many others.

I’m following up with another post after this and I wanted to have the most recent GiftHulk payment proof online for it, so here you go:

(Click here to see my other posts about GiftHulk.)

GiftHulk emails you to let you know it’s ready for use, and then they post the code on your profile. It’s convenient!

I cropped out the code to keep it simple. It’s used and gone anyway. (MIIIIIINE)

On another note, if you’re already a member of GiftHulk and you’ve played the treasure chest, you may have seen the Fountain of Youth codes they give out occasionally for X number of people to use. I’ve got several that I haven’t shared yet and only I have used them for one out of however many uses. If you want some extra points (free and legitimate, they encourage sharing on Facebook/Twitter right on the page!) then drop a comment and let me know.

It’s coming up on the end of the month, and I remembered that I ordered an Amazon card from GiftHulk.

GiftHulk is still paying out as of June 2012. This time they put the code for Amazon in my account’s order history instead of emailing me, but I’m glad that I received it.

I opted in for an Amazon card, but they also have PayPal, as well as a lot of other great gift card options.

Click the thumbnail to see the full image. I intentionally left out the code number, but nice try. ;)

Click here to sign up, or click the banner below. It’s a great site with tons of great features (Search & Win, daily treasure box, offer walls, and more). You can use the code “freeskrilla” when you sign up through my link to get 20 free hulk coins. Once you’ve joined, go to the “Fountain of Youth” to put the code in.

EDIT 4/12/2012: The site has been fixed and everything is working as normal/described. Be sure to read the full article for a list of new features and great updates.

GiftHulk is online and running, but the transition to the new site has not been smooth by any means.

(You can see a few updates I made here.)

First, it kept getting delayed for reasons unknown to the users.

Then, once it was online a few days later, it had to be taken down due to errors and glitches across the site.

When the site was brought back again, it was taken down due to server related issues (high traffic?).

During the previous two periods while the new site was online, it was discovered that the price of items in the store had been increased to a much higher rate, but existing users with existing Hulk Coins had the same amount they did before. So the currency value was different, but existing users were pretty angry.

After some more time, it is now back online and running, but many of the issues remain. The Hulk Coin issue is resolved and existing users should now have a modified amount of Hulk Coins, which would vary depending on how many they had in the first place.

Some basic issues remain, like the inability to answer the daily poll, the inability to submit support tickets, and a new feature called the “Treasure Box” will not work. I’ve been told that these specific issues only apply to some users, and others are able to use them as normal. I do not know if this is browser specific, or what is causing it, but I have reported the issues I’m seeing to GiftHulk, and they are saying it will be resolved within a week.

One thing I will point out with all of the issues they’ve had: Their customer support has been great.

The issues with the site are unfortunate, but there are many great new features on the site.

A few of the new features include:

You can read more about the new features and design here on their site.

Current issues aside, the new site is aesthetically pleasing and easy to navigate. New users and existing users should be able to navigate the site without any issues, and there is plenty of eye candy to see. I can’t forget the new mascot! You can see it at the top and bottom of this post, and it looks better than the old one.

I will continue to use the site, and I hope that you’ll join me. Click here to sign up!

Why make it rain when you can make it hurricane? $$$